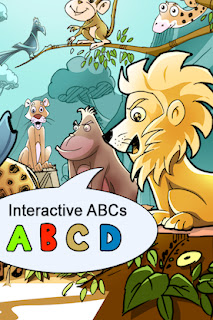 Just released October 14, 2013! Interactive ABCs is a fun and exciting way for toddlers to learn the English alphabet on an iPhone or iPad device.

Learning for children has to be engaging and interactive.  Otherwise, the kid will start playing Angry Birds or go through your photo gallery.  Apps for learning have to be visual, auditory, and kinesthetic.  Repetition is key.  We took these factors into account when creating Interactive ABCs and we think your kids will love it!

Your children will actually learn the alphabet with this app!
Trapped in the jungle with wild animals, you and your children are one tap away from exploring a world of lions, zebras, elephants and so much more!

Repetition, Repetition, Repetition…With Interactive ABCs, children will be able to interact with alphabet letters, hear the correct pronunciations and associate the ABCs to animals.
Kids will have a blast learning their ABCs and building vocabulary with the adorable jungle animals in Interactive ABCs! Each alphabet letter features an interactive ‘drag letter into place’ game with talking letters, a short animation and the animal’s name. Before you know it, your child will be reciting the alphabet, teaching you new animals that they have learned!
What Parents and Kids are saying: 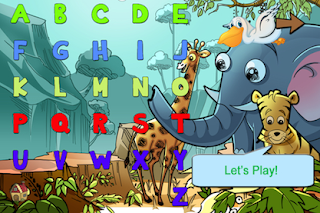 “Start super early! The younger they are the sooner they learn. Their brains are little sponges. Alternate from verbal to visual cues because they absorb everything that they are exposed to. Repetition is key, as well.” – Noella (Mother)

“A, B, C, D, E, F, G, H, I, J, K, L, M, N, O, P, Q, R, S, T, U, V, W, X, Y, Z” – Jason (3 years old)
Features:
* Text and voice overs for correct reading and pronunciation
* Fun Animal Exploration-26 different animals with spellings and voice overs
* Delightful animations, interactive and fun
* Educational ABC mini-games to drag letters into place to form Words
* Interactive ABCs is designed with your children in mind – there are no high scores, failures, limits or stress. Your children can interact with the app at their own pace.
* Create words by combining letters
* Don’t miss the soundboard at the end of the app. Tap on the letters to hear their sound.
*Safe for children. Interactive ABCs does not call any 3rd party tracking nor does the app connect to any social networks or websites

* NO in app purchases

To see a demo of the app in action, you can check out a video of its sister app to get a feel for what it does. Here’s the video of the Assyrian ABCs app.   I’ll try to get a demo up and running for the English Interactive ABCs shortly